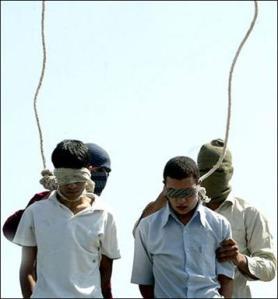 The public was informed of the Nazi death camps on December 17, 1942, in Great Britain’s House of Commons.  That was just 68 years ago.  My good friend Louise McWhorter will be 90 years old this February. She was 21 years old when that announcement was made.

The Holocaust wasn’t all that long ago.

Some German theologians resisted National Socialism and it cost them. Paul Tillich was dismissed from his teaching post at the University of Frankfurt and took a position at Union Theological Seminary. Karl Barth was driven from Germany to Switzerland.

In 1939 Dietrich Bonhoeffer returned to Germany on the last scheduled steamer from the United States, despite the pleadings of American colleagues concerned for his safety. Bonhoeffer was a theologian and a pacifist, but decided he couldn’t live with ideological pacifism in the face of the concrete evil of National Socialism. In April 1943 he was arrested for his participation in the plot to assassinate Hitler. Bonhoeffer was hung with piano wire in Flossenburg Prison Camp in April 1944, just a few days before it was liberated by the Allies.

Adolf Hitler didn’t create anti-Semitism. Prejudice against the Jews had existed in Germany for centuries. Martin Luther was notoriously anti-Semitic. What Hitler did do was use it as a pretext, this pre-existing prejudice against Jews, and fan it into hatred, blaming them for all of Germany’s ills. He turned Germany’s tolerance of Jews into Germany’s sin, and the cause of Germany’s punishment. According to the Nazis, Germany was suffering her indignities and defeats because they tolerated Jewish influence in German cinema, industry, medicine, education, journalism, and politics.

The Jews were scapegoats. They were perfect. Christ-killers. They polluted the German Church with their false conversions. It was impossible for them to be Christians.

They were as decent and law-abiding as the everyone else, which made them defenseless. What civilized person could imagine what the government had planned for them. And they were picked up, one at a time, and put on trains headed east.

Hitler capitalized on the pre-existing antipathy toward Jews and turned the “decent Germans” against the small percentage of Jews, or intimidated them into standing by silently as the land was depopulated of the infestation. With a handful of exceptions, the Lutherans went along with it. With a handful of exceptions, the Catholics went along with it.

In junior high school I discovered Leon Uris in the school library. His books Exodus and Mila 18 made a profound impact on me. In my spare time I read about the Polish Ghetto and the Extermination Camps. Married couples diabolically forced to torture one another. Lampshades made of human skin. Hiding in latrines.

Today in the U.S., major leaders, some political, but mainly Christian, have given us a new scapegoat to blame our nation’s problems on: gays and lesbians. This is how it goes:

A new threat has arisen since the 1970s: homosexuals. They threaten the church, but they also threaten the entire nation. Their radical gay agenda is being forced down our throats. Everywhere you turn, there they are: on television, in the movies, in the schools, in the churches, in their parades, even in congress. They are a corrupting influence. It’s bad enough that we let them teach our children in public schools, now they want to adopt children–and do God-only-knows-what to them in private. And now they want us to marry them and ordain them. They want us to not only tolerate them, but to give them our stamp of approval. Tolerance itself is a sin.

A little-noticed action was taken by the U.N. in November. For ten years homosexuals have been included on the U.N. list of categories of people specifically protected from extrajudicial, arbitrary and summary executions. The protected categories includes street children, human rights defenders, members of ethnic, religious, and linguistic minority communities.

Just before Thanksgiving, 2010, the West African nation of Benin introduced a measure to remove sexual minorities from the list of protected classes. The measure passed. Now it’s okay for countries to practice the extrajudicial, arbitrary and summary execution of gays, lesbians, bisexuals, and transgender individuals.

The Holocaust happened in a civilized, technologically advanced country during a time of financial upheaval and political chaos. A lot of people say we’re in for something similar in our own future.

“Speak up for those who cannot speak for themselves;
ensure justice for those being crushed.
Yes, speak up for the poor and helpless,
and see that they get justice.” (Proverbs 31:8-9)

The Holocaust wasn’t that long ago.

Husband, Father, Author
View all posts by Ron Goetz →
This entry was posted in Homosexuality. Bookmark the permalink.