Luke’s Gay Apocalypse: the Lightning Bolt and the Eagles

A major piece of evidence supporting the thesis of a deliberate gay theme in Luke’s Small Apocalypse (which I call “Luke’s Gay Apocalypse”) is found in the two primary symbols of Zeus, the supreme god in Roman religion. The symbols of Zeus are the lightning bolt and the eagle, and they appear in verses 24 and 37 of Luke 17.

For as the lightning, when it lighteneth out of the one part under the heaven, shineth unto the other part under heaven; so shall the Son of man be in his day.

And they answering say unto him, Where, Lord? And he said unto them, Where the body is, thither will the eagles also be gathered together.

As I investigated the Latin and Greek evidence for lesbian grinding in verse 35, I was concerned that these two symbols, so strategically located in Luke’s Small Apocalypse, had no apparent bearing on my thesis. This was especially true of the eagles, or vultures, which immediately followed the gay and lesbian couples. Those inexplicable “vultures” were a nagging loose end.

I subsequently investigated the Luke 17 passage specifically as the “Q Apocalypse,” and was blessed to find a terrific resource, ‘Where the Eagles are Gathered’: The Deliverance of the Elect in Lukan Eshatology, by Steven L. Bridge (2003), who connects the lightning and the eagles with Zeus and Ganymede.

Zeus, and Ganymede ministering to the Eagle

It is impossible to overstate the importance of ideological symbols for imperial domination. To effectively dominate an empire, the use of symbols is systematic and deliberate. And in the ancient world, religion was ideology. Rome required every conquered territory to acccept the Roman pantheon, and acknowledge Zeus as their supreme god. Roman art, architecture, and coinage dominated the experience of Rome’s subjects, from Britain and Iberia in the west to Egypt, Greece, and Palestine in the east. For the Romans to maintain supremacy over their territories, the subject peoples could never escape the propaganda of Rome’s religious images.

Zeus, and the Eagle holding the stylized Lightning Bolts in its claws

The Lightning Bolt and the Eagle 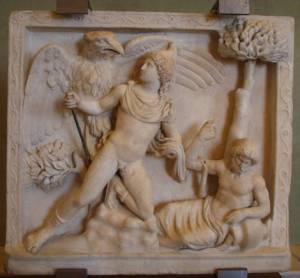 The lightning bolt was Zeus’ powerful weapon, and the eagle was sent to retrieve the bolts after Zeus had thrown them.  One of the most popular and enduring stories involving the eagle describes the Abduction of Ganymede. According to the story, the King of Troy had a beautiful son named Ganymede, and Zeus found Ganymede irresistibly attractive.

According to the story, the attractive young Ganymede is abducted by an eagle, who in one version is Zeus himself, having transformed himself into an eagle. While the story had several uses (as a paradigm for imperialism and an allegory for Truth), in the Roman era the sexual nature of Ganymede’s relationship with Zeus was widely recognized. (See Neill, Verstraete & Provencal, Williams, and Sacks, Murray, and Bunson) 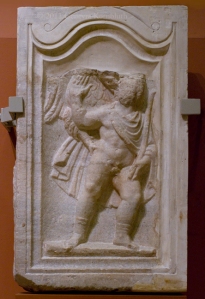 Zeus had numerous liaisons with mortal women, but only one same-sex relationship, and the eagle is vividly associated with his romantic relationship with Ganymede. Just as the donkey reminds Christians of the Nativity and the Triumphal Entry, so also the eagle reminded Romans and Roman subjects of Zeus’ sexual relationship with his cup bearer and servant, Ganymede. The story of Zeus and Ganymede adds a layer of sexual meaning and interest to the eagle’s image which is missing from its common use as a symbol of power. 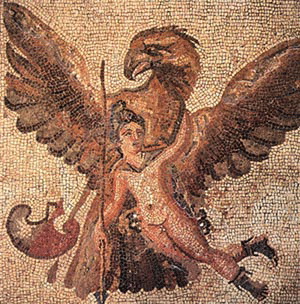 Mosaic: The Abduction of Ganymede

Let’s imagine for a moment that Christianity was the official religion of an empire.  Christian logos (symbols) would permeate the culture. Well-known Bible characters dominate art, architecture, even the currency.  The bust of the current head of state would appear on one side of a coin with the symbols of Jesus Christ on the other, for example, the cross and the crown of thorns. Other coins might celebrate Paul, the Nativity, or John, the disciple Jesus loved. 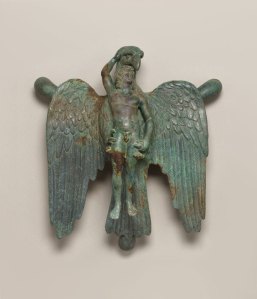 As subjects of the Christian empire, we would all be familiar with the stories that go along
with the engravings on our coinage, the adornments in our religious and governmental complexes, and the figures in our art and sculpture. And we wouldn’t call our religion “mythology” or our sacred stories “myths.” They would be things we held dear, stories of gods and mortals that were paradigms for our lives.

The ubiquitous presence of Ganymede and
Zeus, symbolized by the eagle, were continual reminders of the acceptability of same-sex relationships among the gods. Craig A. Williams writes: 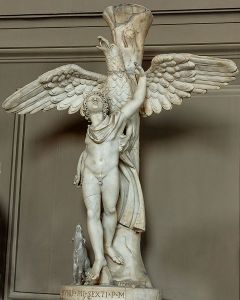 Images of the beautiful young Trojan, usually in the presence of the eagle, dotted the Roman landscape. Juvenal refers to a statue of Ganymede placed in Vespasian’s Forum of Peace as something of a landmark, and the Christian writer Lactantius notes that images of Ganymede and the eagle were to be found in temples to Jupiter and were “worshipped equally with him.” … the image of Ganymede was extremely popular in Roman art. Surviving depictions of Ganymede being approached by the eagle to scenes of the eagle actually grasping the youth or carrying him aloft, and the variety of media in which the mythic paradigm of the beautiful youth swept off his feet by a male lover appears is impressive: Ganymede and the eagle graced wall paintings, mosaics, jewelry, coins, and even sarcophagi all over the ancient world: statuary groups of the pair survive in abundance.

You will remember verses 24 and 37 of Luke’s Gay Apocalypse, at (or near) the beginning and at the very end.

For as the lightning, when it lighteneth out of the one part under the heaven, shineth unto the other part under heaven; so shall the Son of man be in his day.

And they answering say unto him, Where, Lord? And he said unto them, Where the body is, thither will the eagles also be gathered together. 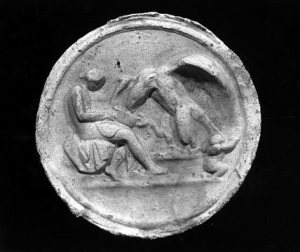 What we have here are the two chief symbols of Zeus, lightning and eagles, one of which is vividly associated with Zeus’ same-sex relationship with Ganymede, located at the beginning and end of a discrete unit of the third gospel, Luke’s Small Apocalypse. That distance between the verses may seem great, and this distance has obscured their historical and cultural connection. But these were the symbols of Zeus. If we were to read a paragraph that opened with a mention of a “crown of thorns” and ended with a “cross,” no one would doubt that the crucifixion was a central element in that paragraph. 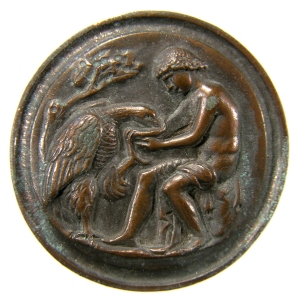 Architectural art included the mosaics that decorated people’s homes and living spaces. Mosaics portraying Ganymede and the Eagle were popular, and have been uncovered in present-day Britain, Tunisia, Tarsus, Cyprus, Beirut, and Sicily.

Anywhere in the Roman Empire, someone reading Luke 17:20-37 would immediately recognize Zeus and Ganymede in verses 24 and 37.

The Gay Theme of Luke’s Small Apocalypse: Flagged for both Jewish and Gentile Audiences 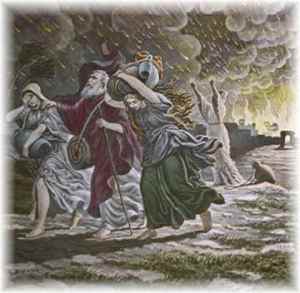 Luke’s Gay Apocalypse, then, opens and closes with reminders of Zeus and Ganymede, the Roman empire’s primary religious and cultural symbol of what we would today call “homosexuality.”  In the center of the gay apocalypse is the detailed account of Sodom’s destruction, Judaism’s primary religious and cultural symbol to what we would call “homosexuality.”   Thus, Luke flags the gay theme of Luke 17: 20-37 both of his two main audiences, his gentile audience and his Jewish audience.

Considering the fact that Luke is written with a gentile audience in mind, cultural references like the lightning and the eagle (with its dramatic narrative) are important.  They match the target audience that has already been established for Luke:  predominantly gentile readers. Furthermore, they are consistent with other cultural references in Luke-Acts. Recall Paul’s encounter with the philosophers in Athens, where he quotes the Greek philosophers Epimenides and Aratus.  Paul was formerly a bicultural rabbi in Tarsus, and his habit of cultural relevance is characteristic of his Mission to the Gentiles and is clearly consistent with Luke’s Gay Apocalypse.  In Luke-Acts we have cultural references to the Roman world, from the world of philosophy to the world of religion.

There is then an array of thematic indicators in Luke’s Small Apocalypse, all pointing to a gay theme. First, the iconic symbols of man-on-man sex of two main cultures, Roman culture and Jewish culture, are present, with the Roman thematic indicators at the beginning and the end, and the Jewish thematic indicators in the middle. Second, there are two pairs of same-sex couples at the climax of the apocalypse, the first of which (the gay couple) are described with a direct O.T. reference, and the second of which (the lesbian couple) uses a euphemism for sex present in Hebrew, and in the Latin and Greek of the first century A.D.

Any single indicator, standing alone, would mean nothing.  The presence of all four of these same-sex thematic indicators in the already recognized unit of scripture known as the Q Apocalypse is strong evidence of deliberate crafting and intent.

I’d like to add this in reply to an issue brought up by a friend on Facebook. Please notice that I am not arguing: “See? The Romans accepted same-sex relationships, and so should we.” No, that is not what I have argued. What I have argued is that the allusions to Zeus and Ganymede were a signal to gentile readers that the topic of discussion was same-sex relationships, and that those religious allusions would have been immediately understood. Thanks for the opportunity to clarify the argument.

6 Responses to Luke’s Gay Apocalypse: the Lightning Bolt and the Eagles