The Bed in Luke and Leviticus 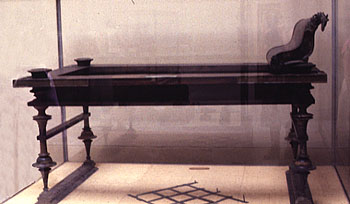 Thanks to AB’s comment, I found something surprising about the relationship between Luke’s “two men in one bed” and the phrase in Leviticus about a man laying “with a man as with a woman.”

In Leviticus 18 and 20, what is translated as “as with a woman” is literally “beds of woman” in Hebrew.

As you may recall, Jesus says that “In that night, two men will be in one bed; one shall
be taken and the other left.”

I’ve been saying that the only O.T. cross-references for Luke 17:34 are those two verses
in Leviticus.  But I hadn’t yet looked at the Hebrew, so I had no idea how right I was.

“Beds of woman” is understood to be an idiomatic expression.

So the connection of Leviticus 18:22 and 20:13 with Luke’s “two men in one bed” is
even more concrete than I realized. The word “bed” appears in all three places.

[To read all the posts on the Gays and Lesbians in Luke 17, click here.]

Husband, Father, Author
View all posts by Ron Goetz →
This entry was posted in Bible, Two Men in One Bed and tagged Bible, Doctrine, Gospel of Luke, Homosexuality, Jesus, Theology. Bookmark the permalink.