The Collapse of Civilization: Dobson, Ley, and Goebbels

I have been astonished by the striking similarities between Nazi propaganda and the rhetoric of Dr. James Dobson.  Several years ago I found a website, the German Propaganda Archive, where Professor Randall Bytwerk of Calvin College publishes his translations of Nazi and East German propaganda. As a professor of communications in a Christian college, Bytwerk takes seriously the need to instruct his students to be discerning when faced with propaganda.

When Dr. Dobson made the news this month, his political endorsement reminded me again of Germany and the Jews, and of propaganda.

Dr. James Dobson is perhaps the most effective Christian rhetorician and propagandist of the late twentieth century. When it comes to framing issues, generating coded language, and staying on message, he’s hard to beat. Because his background is primarily academic and not preacherly, he is never caught uttering those outrageous statements that made Jerry Fallwell and Pat Robertson so easy to quote.  You’ll never catch Dobson saying that AIDS or some hurricane is God’s judgment on homosexuals, but you will find that more refined brand of propaganda.

Let me say something upfront. I grew up as a fundamentalist. As an adult and a parent I respected James Dobson and his approach to child rearing. So as you read this, realize that despite all the changes I’ve gone through, evangelicals remain “my tribe,” and the language of Zion “my mother tongue.” I consider James Dobson my brother. I am not demonizing him, I just think he’s wrong.

James Dobson is Not a Nazi

The fact that there are similarities between his rhetoric and Nazi rhetoric does not mean that James Dobson a Nazi. But the similarities are grounds for concern. First, we need to question the legitimacy, wholesomeness, and integrity of Dobson’s rhetoric. Second, we need to look inward, to understand our own susceptibility to verbal manipulation, and to interrogate the legitimacy, wholesomeness, and integrity of our own rhetoric.

In his announcement this month, Dobson stuck to the language that has characterized his unrelenting message for decades. In this post, I’m going to focus on “the collapse of civilization” and see how Dobson’s use of the concept compares to that of propagandists, Robert Ley and Joseph Goebbels.

The Collapse of Civilizations

In his announcement in late January, 2012, Dr. Dobson invoked the same boilerplate he’s been using for decades.

The institution of the family is the key issue facing this great nation. It is the foundation, the bedrock, upon which every dimension of Western Civilization rests. If it is undermined or weakened by cultural and governmental forces, the entire superstructure will collapse in short order. And indeed, today it is in serious jeopardy. The very definition of marriage is threatened, which has implications for the next generation and the stability of society itself.

Through his rhetoric, Dobson turns his trademark concern for the family into a concern for the whole of Western Civilization. Since all of us have concerns and insecurities regarding the quality of our family relationships, how well we fulfill our duties, or measure up to expectations, Dobson’s invocation of the survival of Western Civilization is a cheap way for us to prove that our hearts are in the right place. “You see, I really do care about my family. That’s why I vote against the radical homosexual agenda.” Dobson’s coupling of family and civilization (with politics lurking around there as an intermediary factor) makes his rhetoric quite potent. 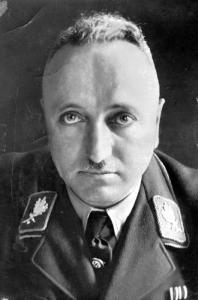 Nazi propaganda transformed the ruthless desire for power into a virtue by casting their campaign into one that would ultimately benefit all of Western civilization, not just the Aryan race.  The way to justify their genocidal plans was to list the civilizations that allegedly collapsed because they tolerated the unchecked presence of Jews. In his book, The Pestilential Miasma of the World (1944), Robert Ley told the German people:

The Jewish problem is the same today as it always was, and in fighting the Judah, we find ourselves in the best company in history…. He who tolerates the Jew, who takes on his customs, who works with him, who adapts his mentality, who eats, drinks, and lives with him, who even thinks the Jew is chosen and believes he can learn something from the Jew, who expects the salvation of the world to come from the Jews, he will inevitably be ruined by Judah. He will die from it, just as the Egyptians, Persians, Greeks, and Romans did after they grew old and could no longer defend themselves against the Jews.

The book, To Know the Jews is to Understand the Meaning of the War! (1944), released by Joseph Goebbels and Robert Ley late in the war, lists three civilizations and claims their downfall resulted from their toleration of the Jews.

James Dobson’s newsletter also invokes the allegedly disastrous threat to civilization, but this threat is not the Jews. In Dobson’s alarmist rhetoric, the threat is from radical homosexuals and their agenda to destroy the family. In his newsletter titled, “In Defending Marriage — Take the Offensive!” (April, 2004), Dobson takes the same “long view” of history, and asserts, without documentation, that Western Civilization is in jeopardy if we tolerate the threat to the family posed by homosexuals.

“Barring a miracle, the family as it has been known for more than five millennia will crumble, presaging the fall of Western civilization itself.”

Dobson’s newsletter, “Marriage on the Ropes” (September, 2003), is subtitled, “Dr. Dobson speaks on the importance of protecting traditional marriage against the redefinition sought by gay activists.” Using his heated rhetoric, he invokes the same grand concern for the survival of civilization.

There have been times of hope and times of despair during this struggle, but overall, the family has been steadily losing ground. Now, the institution of marriage is on the ropes and western civilization itself appears to hang in the balance.

According to Dobson, Marriage Equality threatens “the institution of marriage,” and thereby threatens civilization itself.

But even for those who don’t take the Bible into account, heterosexual marriage has been the cornerstone of every civilization from the beginning of humanity. Only in the last few “milliseconds” of human history have we even entertained the idea that marriage is anything other than the union of a male and a female.

Dobson acknowledges that “there have been times when homosexuality has been embraced by segments of certain cultures, as it was in ancient Greece or Rome,” but says that every continent in the world “has always embraced heterosexual marriage as the norm.”  I would point out that male property rights to their wives and their slaves have been “the norm” except for these “last few ‘milliseconds’ of human history” as well.

There is, however, an exception to Dobson’s allegedly universal norm of marriage consisting of the union of one male and one female. That exception is in the Hebrew Bible itself. Biblically speaking, the roughly 2,000 years from the call of Abraham to the writing of I Timothy is not a model for what is called “traditional marriage.” Abraham had his Sarah and Hagar. David had his seven wives, and Solomon his 700 wives and his harem of 300 concubines. The Torah itself makes provision for multiple wives: “If a man who has married a slave wife takes another wife for himself, he must not neglect the rights of the first wife to food, clothing, and sexual intimacy” (Exodus 21:20). Not until I Timothy do we have the Pauline directive that an elder be the husband of one wife (see previous post).

The Temptation of Political Power

Claiming that your cause is to rescue Western Civilization from collapse raises the stakes for your followers. It makes their participation more noble, even heroic. When you are calling people to march into battle and risk death, this inflated rhetoric is understandable. James Dobson, however, is calling people to march into a voting booth and risk nothing. In his case the inflated rhetoric seems dishonest at best, delusional at worst.

Unfortunately, Dr. James Dobson succumbed to the temptation to political power many years ago.  I am reminded of the temptations of Christ.

The devil took him to a very high mountain and showed him all the kingdoms of the world and their glory.  And he said to him, “All these I will give you, if you will fall down and worship me.”

Dobson seems to have taken up that offer, and chose politics as his primary weapon of choice–politics combined with radio and print media. Like his predecessors, he believed that mortal human beings were his enemies.

For this reason God sends them a strong delusion so that they will believe what is false, so that all will be condemned—those who did not believe the truth but enjoyed unrighteousness.

In junior high school I devoured all the Leon Uris in the school library. I learned that state-sponsored genocide was not something humanity ever outgrew, but was something that occurred recently, in a civilized country of high culture, Germany, during the lifetime of my parents. I learned that common and socially acceptable bigotry could provide the foundation for scapegoating during times of social upheaval. When I read the Nazi propaganda in translation, much of it was so very familiar. And embarrassing.

5 Responses to The Collapse of Civilization: Dobson, Ley, and Goebbels