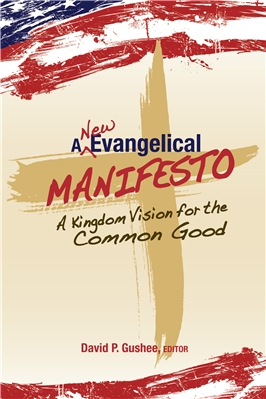 An Evangelical Alternative to Christofascism

When I first perused A New Evangelical Manifesto, I was more than a bit dubious. The fact that there was barely a mention of LGBT issues, let alone a chapter, had me conjuring all sorts of suspicions. Checking out their website, however, and examining the book more carefully, allayed my concerns, and I discovered that the recent offering from the Disciples of Christ publishing house, Chalice Press, is a significant contribution to the aspiring leadership of America’s churches, and will certainly broaden the ministry horizons of anyone who reads it.

“A New Kind of Evangelical Christianity”

The first section of the book is titled “A New Kind of Evangelical Christianity,” and was certainly my favorite. Brian McLaren’s piece, “The Church in America Today,” is a general introduction to the struggles faced by Christendom’s American institutions, which will be familiar to most of us, although some review is always good.

Four of these readings were of special interest to me, Steve Martin’s “Where the Church Went Wrong” and “Kingdom Community,” Richard Cizik‘s “My Journey toward the ‘New Evangelicalism,'” and Glen Harold Stassen’s “God’s Vision for the Church–Kingdom Discipleship.” (For a Youtube clip of Stassen discussing the incarnational life, click here.)

Martin directed Theologians Under Hitler, the 2005 documentary of how three major theologians provided tragically misguided support which assisted the Nazi party to coopt the church for German nationalism. This warning from history is reflected in 1) Martin’s several pages on Elisabeth Schmitz, a woman who played a very costly communication linkage on behalf of German Jews in the Berlin ghetto; 2) in his three page introduction to Paul Althaus, Emanuel Hirsch, and Gerhard Kittel, the three subjects of his documentary; and 3) in Glen Stassen‘s discussion of Dietrich Bonhoeffer and Martin Luther King. (FYI: Gerhard Kittel, the German theologian, was the general editor of the famous ten-volume Theological Dictionary of the New Testament. While “Kittel’s” is now out of vogue, it was popular and influential in its day. I still own a set.) 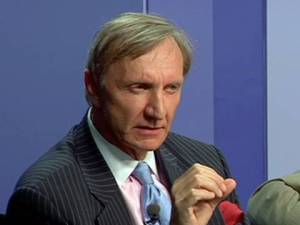 Richard Cizik, forced out of the NAE for his concerns over climate change and his 2008 vote for Barak Obama

For those of you who missed the story, Richard Cizik is the 28-year veteran of the National Association of Evangelicals who was forced to resign in 2008 because of left-leaning comments he made to NPR interviewer Terry Gross on Fresh Air. This piece is his first published statement about the experience that effectively black-listed him from every evangelical organization with which Cizik was involved. It is a remarkably gentle commentary on the how evangelical leaders have allowed the Republican party to coopt the communities of faith given by God for them to steward. To view a 4-1/2 minute Youtube clip of Cizik describing his experience of being ousted from the NAE, click here. His chapter is better than the Youtube clip, however!

The book’s second section is focused domestically, and deals with “Holistic Love of Marginalized Neighbors.” These are the topics covered:

Jennifer Crumpton’s “Those Trafficked and Commodified” is the longest chapter in the collection at twenty pages, a wise editorial allocation for couple of reasons. First, sex trafficking is at epidemic levels and causes untold suffering to millions of women and girls world wide. Second, it is an “issue” that nearly everyone agrees on. This agreement is an area of guaranteed common ground on which virtually all Christians could meet and work together.

Section three is devoted to “Redemptive Approaches in Public Life” and covers the following topics.

As you can see, the contents of sections two and three look a lot like the table of contents of a reader on ethics, which the book is. A New Evangelical Manifesto is a book of readings for a class on Christian social ethics. Not surprisingly, five of the contributors (Markham, Alexander, Camosy, Stassen, and Gushee) are professors of ethics or social responsibility. But the book is far more than a book on Christian social ethics.

An Evangelical Alternative to Christofascism

My initial feeling was that he book was not a manifesto, if you have in mind the great manifestos from history, like the Ninety-Five Theses (Martin Luther, 1517), The Rights of Man (Thomas Paine, 1791), A Vindication of the Rights of Woman (Mary Wollstonecraft, 1792), Communist Manifesto (Karl Mars & Friedrich Engels, 1848), Mein Kampf (Adolf Hitler, 1926), Silent Spring (Rachel Carson, 1962), Port Huron Statement (Tom Hayden, SDS, 1962), and A Christian Manifesto (Francis Schaeffer, 1982).

I was wrong. I was being excessively picky (!), comparing A New Evangelical Manifesto to history-changing manifestos of the past. The book actually is a manifesto, calling American evangelicals to pay attention to issues of social justice, and alerting them to the fact that NOM, the IRD, and FOTF haven’t cornered the market on Biblical social holiness. The book, and the New Evangelical Partnership, provide a list of priorities and an organization through which to address those priorities.

A New Evangelical Manifesto is an alternative to Christofascism for evangelicals and other conservative religious. The NEP recognizes the horrible temptation to which American evangelicals are falling prey: the allure of totalitarian power over society. Please check out their DVD and video offerings: Elisabeth of Berlin, God with Us: Baptism and the Jews in the Third Reich, and Theologians Under Hitler, by clicking here.

Please consider purchasing these DVDs and videos. Education on totalitarianism and genocide is essential to preventing them, at least in our own countries. The front pages of my DVD case are devoted to Nazi Germany and to the Holocaust. Totalitarianism and genocide were the scourges of the twentieth century: the Armenian Genocide (1914-1918), the Holocaust (1933-1945), the Cambodian Genocide (1975-1979), Bosnia and Herzegovina (1992-1995), and Rwanda (1994) are just a few. (For a more complete list of genocides, click here.)

If you have any input in your congregation for study groups of any kind, these resources belong in your personal or church library. Genocide is not something that nations only perpetrated in the ancient near east, and is not reserved to third-world countries.

If you lead discussion groups or topical classes, take a look at A New Evangelical Manifesto before you purchase other materials. If you are involved in higher education or in library acquisitions, do consider this book. Pastors looking for a preaching resource on Christian social issues, ditto.

I just signed up to receive email updates from the New Evangelical Partnership for the Common Good, and I think you might like to sign up, too (click here). The New Evangelical Partnership is empowering American Evangelicals concerned about human rights, climate change, nuclear disarmament, poverty, US foreign policy, prison reform, Muslim-Christian dialogue, and LGBT issues. I think you will find their new book informative, sometimes even edifying and inspiring.

2 Responses to An Evangelical Alternative to Christofascism: a Review of “A New Evangelical Manifesto”